The inspiration for this project came from an article in the DEC/JAN 2020 WINTER edition of Family Handyman magazine.  The author constructed a simple yet modern appearing end table designed to house a wireless phone charger.  To reduce costs he built it out of plywood and tempered hardwood covered with wood veneer to make it appear as solid wood.  This design allowed use of a puk charger capable of delivering a charge through the approximately 1/8” hardboard plus veneer but not capable of charging through ¼” or more of solid wood. 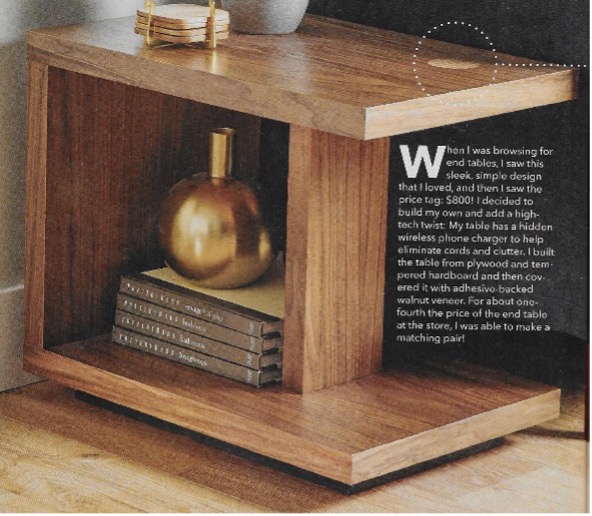 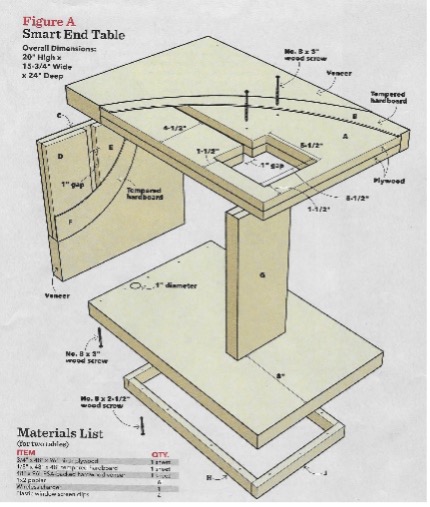 While I liked the design, I intended the tables for two grandsons and I wanted them to be ‘heirloom’ projects that would last long after short distance wireless phone charging became a relic of the past.  Consequently, I retained the overall design but joinery methods were adapted to the solid wood design with the Kew Labs UTS-1 recessed within the top to allow charging the latest phone models, including the Apple iPhone 12.  This newer charger is cable of operating through solid wood or other material (ex metal) up to 1” of thickness, depending on the model itself (thin or thick).  After consultation with Rupert Han of Kew Labs I chose to go with the ‘thin’ version charging on low power through a walnut thickness of approximately 0.40” (10 mm), the thinnest recommended distance.

Each table requires approximately 12 board feet of material, which I was able to source locally in widths from 6-7”.  The top and base each required joining three boards 24” in length; similarly the back required joining three 16” boards, with a fourth 16” long board for the ‘leg’.  After laying out the boards in the order I wanted, I used a dado set on the table saw to cut the recess for the charger on the underside of the center top board along with a slot for the charger wire. 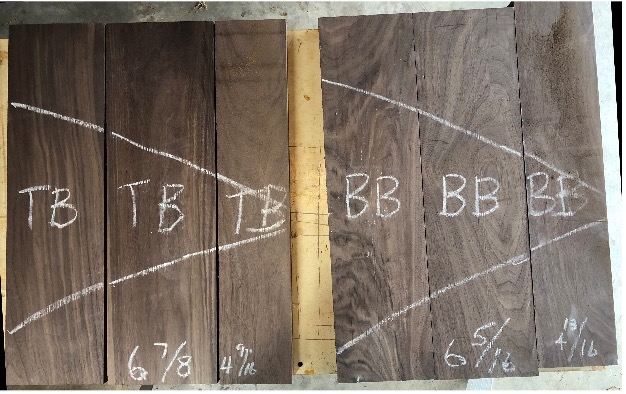 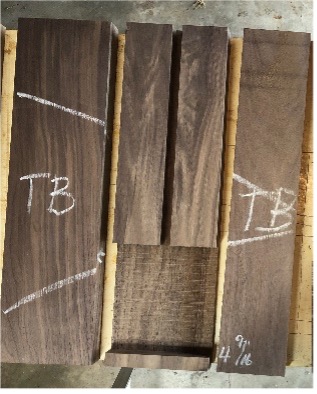 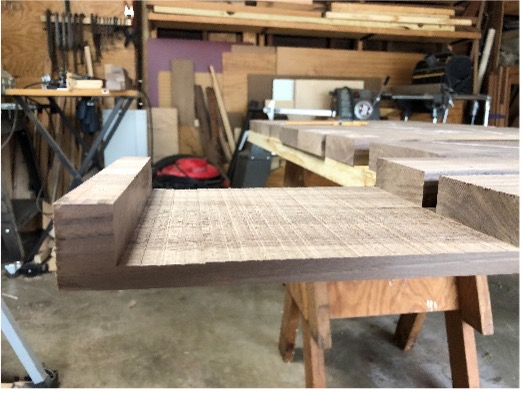 To join the back and leg to the top and bottom sections I chose to use a ‘mortise and tenon’ style glue joint.  With wood of 1½” thickness this glue joint does not need to be reinforced with screws. I used the dado blade set up again to cut the tenons on the back and leg pieces, the ½” wide slots on the top of the center base piece and the underside of the top piece, as well as the wire slot on the center of the middle back piece. 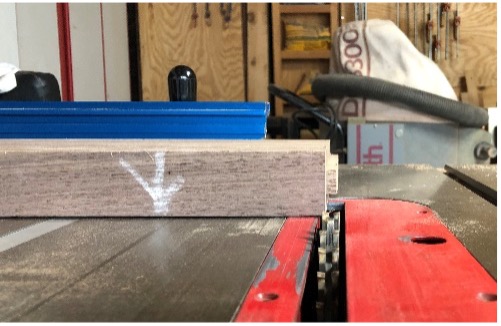 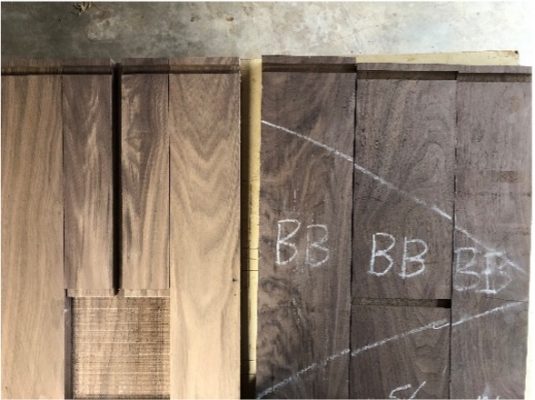 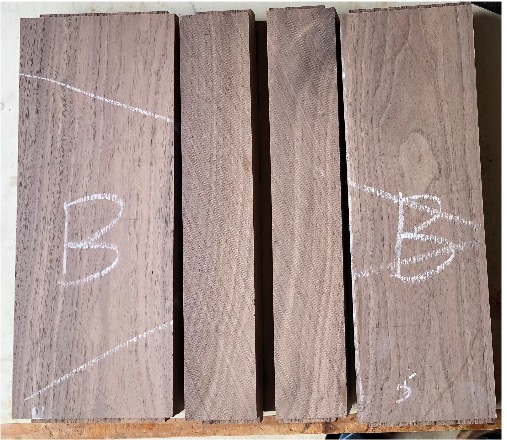 Now it was time to do a ‘dry fit’ to assure all the pieces fit together properly, after which the individual top, back and base boards can be cut to final width and sanded, sanded, sanded before the final glue up 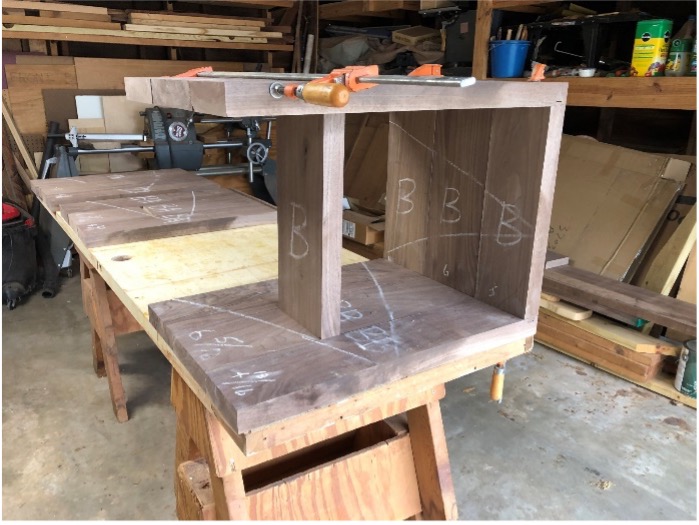 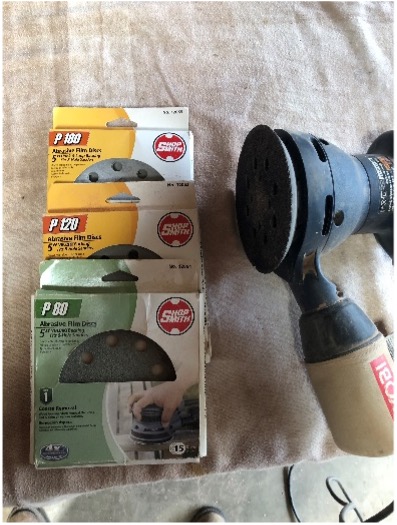 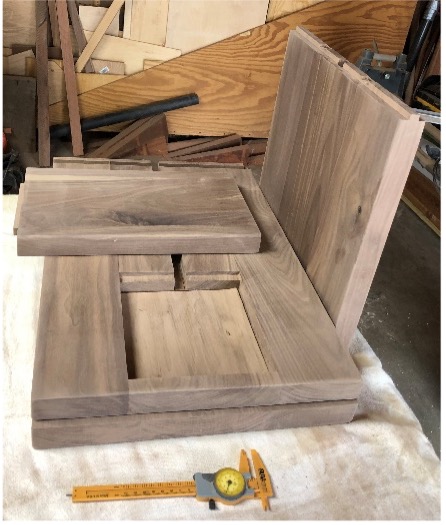 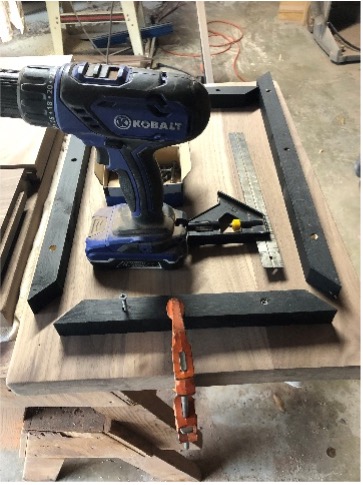 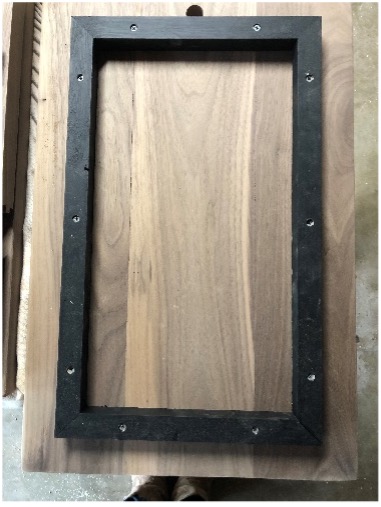 Prior to the glue up, I attached an inset false base to the actual base which would raise the table about 1¼” above the floor and give the illusion that the table was ‘floating’.  The false base was painted black to further hide it from sight.  Note the hole drilled in the base for the charging cord to be inserted into the slot in the back of the table. I considered making the false base thick enough to hide the transformer part of the charging cord, but the transformer is nearly 2” thick and I decided this would raise the actual table too high off the floor, so the transformer will be on the outside of the table itself

As the saying goes, “A man can never have too many clamps when gluing”!  The diagonal clamp is used to make sure the table pieces are square. 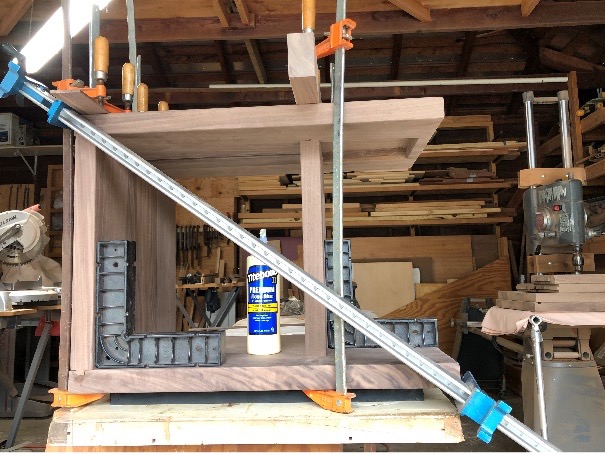 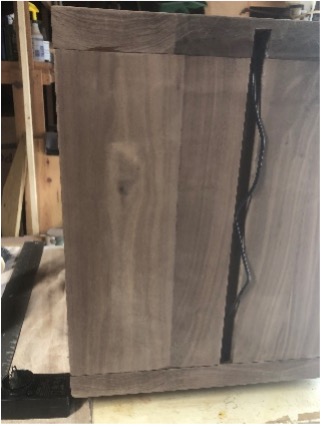 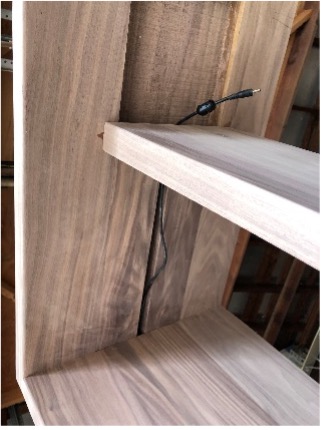 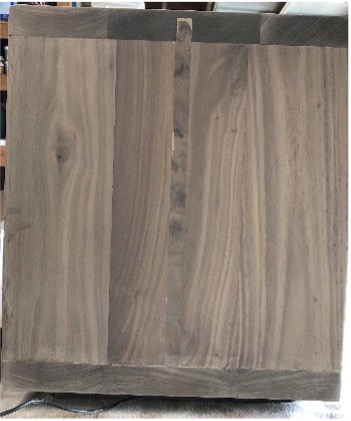 Lastly, I wanted to close up the slot in the back of the table.  I inserted the cord from the Kew Labs charger through the hole drilled in the base and then into the slot on the reverse side of the top. (Note; It would have been possible to ‘fish’ the charger cord through the enclosed back slot and then around the top of the slot into the bottom of the top piece, but inserting the cord first simplified the procedure.) Afterwards I glued a thin piece of the walnut into the back slot.

All that remains now is to apply the final stain, followed by polyurethane and a wax polish, and then screw the Kew Labs charger into place on the reverse side of the top piece! I used MinWax Natural Stain which darkens the wood somewhat while still bringing out the grain of the walnut. The way I apply the polyurethane is to first use a 50/50 mixture of the poly cut with paint thinner for enhanced absorption into the grain, followed by a 75/25 poly/thinner mix and finally straight polyurethane. 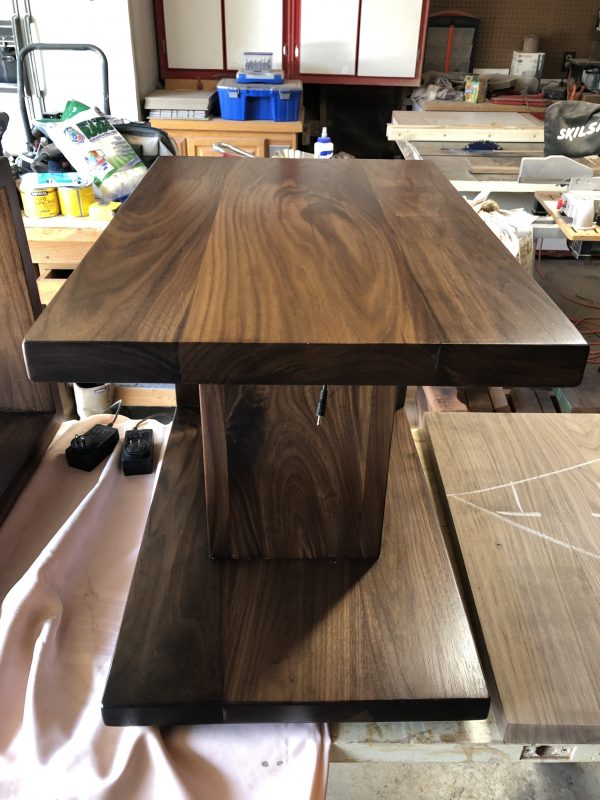 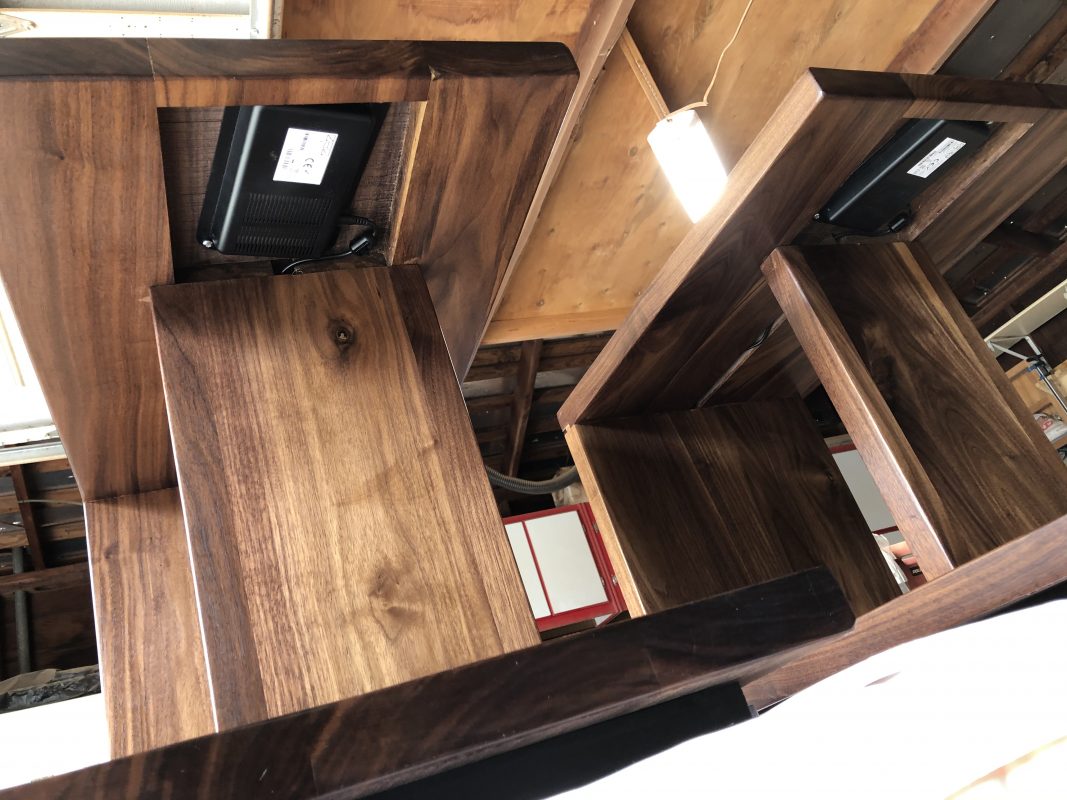 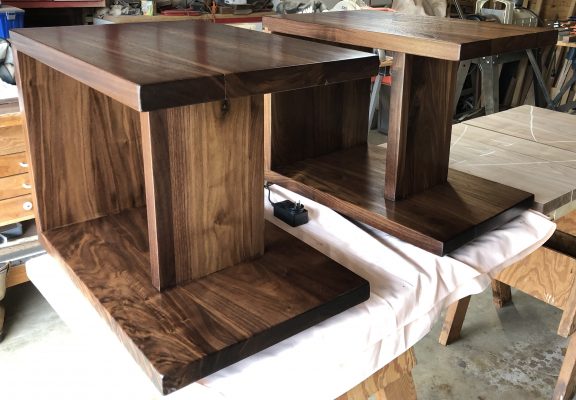 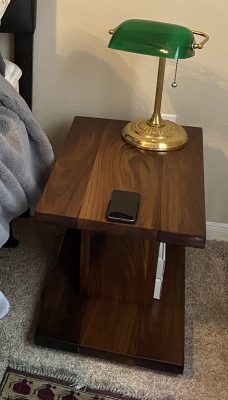 I chose to attach the charger with the included screws rather than the double stick tape and used the wire clips to hold the wire in the slot on the bottom side of the table top.  Now waxed, the tables are ready for delivery!! 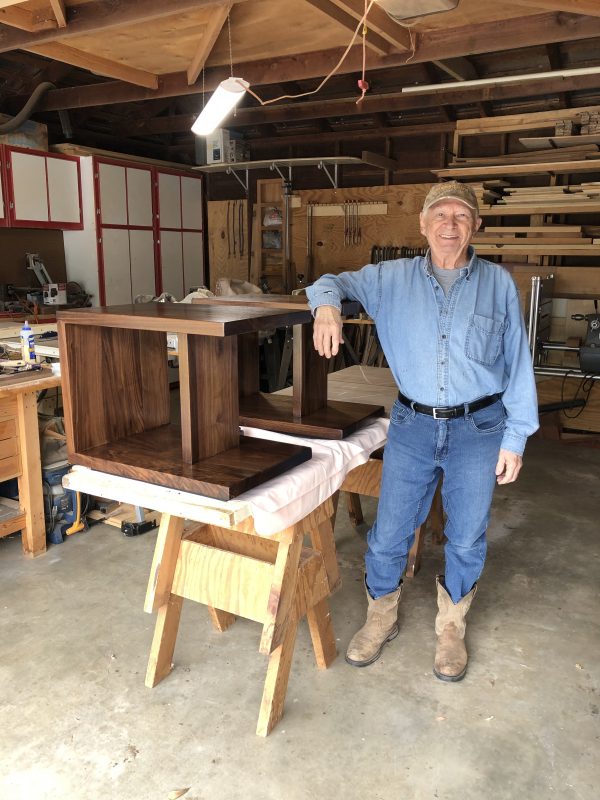